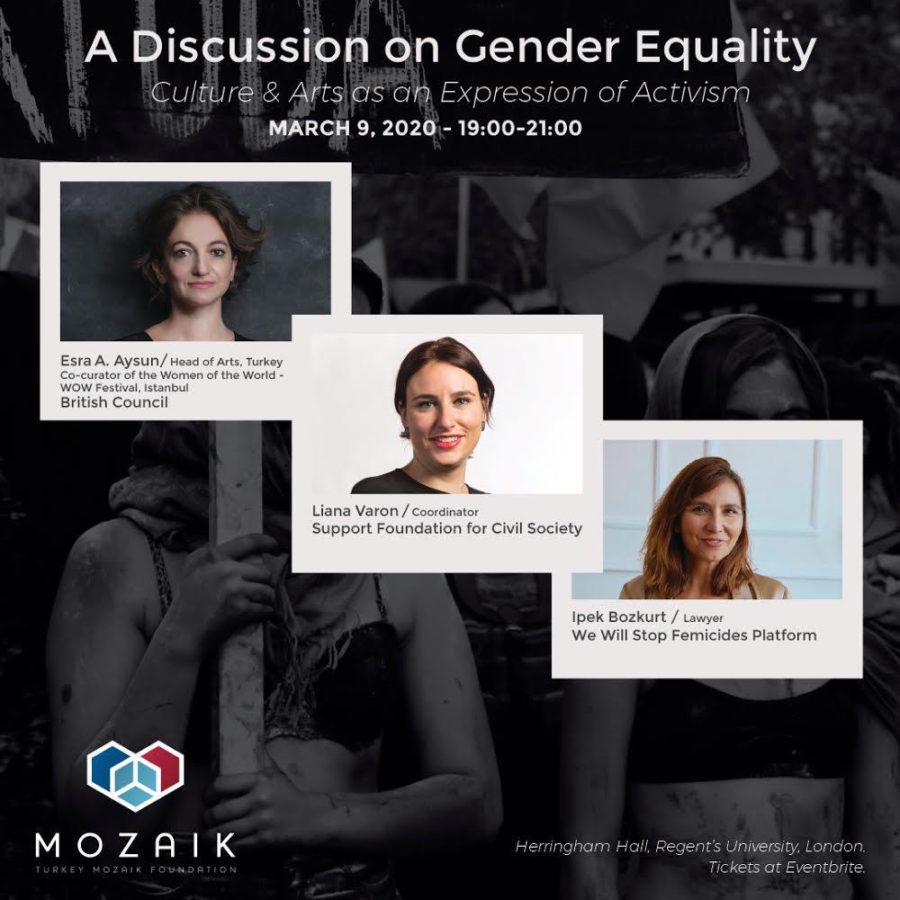 We are proud to present an evening of learning and inspiration with a powerful panel of women from Turkey who will be sharing their passion in achieving Gender Equality. The panel will look at the issue of gender equality through the lens of culture and arts as an expression of activism. We hope you will join us on March 9th for an evening of discourse on gender equality and bring your friends too.

Tickets can be bought at Eventbrite.

Esra A. Aysun, Head of Arts – British Council, Turkey & Co-curator of the Women of the World – WOW Festival Istanbul.

Ipek Bozkurt, Lawyer and Advocacy Coordinator of We Will Stop Femicides Platform, a grantee of Turkey Mozaik Foundation.

Liana Varon, Coordinator at Support Foundation for Civil Society – local partner of Turkey Mozaik Foundation will be moderating the panel.

The programme for the evening is as follows:

Esra A. Aysun, is an arts administrator, working as a consultant, lecturer and writer in the creative sector in Istanbul, Turkey, her native city. Aysun completed her BA at the Sociology Department of Boğaziçi University (Istanbul) and MA at the New York University, Administration of Performing Arts (New York). Following her various professional work and experience at Istanbul Foundation for Culture and Arts, Pozitif Productions and Galerist in Istanbul, she co-led the non-profit consultancy, networking and artistic production initiative CUMA Contemporary Utopia Management from 2009 to 2012. From 2012 to 2014 Aysun was the Director of the Museum of Innocence of Orhan Pamuk till she was appointed and has been acting as Head of Arts at British Council Turkey to current.  As a consultant, Aysun has worked on International Projects for the contemporary theatre DOT (2005-2012), and served as the Arts and Culture Network Program Mentor and Coordinator in Turke, of Open Society Institute (Budapest) (2008-2012). Aysun has been an advisory board member of the IETM Informal Network for Contemporary Performing Arts (Brussels) and a board member of the Cimetta Fund (Paris) and AICA (Istanbul) (2008-2013). Aysun also served as a member of the Advisory Committee of the Pavilion of Turkey in the 55th Venice Biennale (2013). Most current, Aysun has joined the Board of Arter (İstanbul) (2019). As an instructor, Aysun has lectured on Cultural Management at various universities in Istanbul – MIAM/ITU, Yeditepe and Mimar Sinan Aysun undertook the editorship of the Current Issues booklet of the arts magazine Sanat Dünyamız in 2014-15 and is the editor of the book Sanat Yönetimi Üzerine Konuşmalar (Talks on Arts Management) published by Yapi Kredi Publications in 2014. Aysun has been appointed as Co-curator of the Istanbul edition of WOW.  Women of the World festival is a global movement launched by Jude Kelly CBE at Southbank Centre London in 2010, celebrating women and girls and looking at the obstacles that stop them from achieving their potential. To date, WOW has reached over 2 million people worldwide. It is the biggest, most comprehensive and most significant festival dedicated to presenting work by women and promoting equality for women and girls. WOW will be organised in Istanbul in September 2020.

Ipek Bozkurt is a feminist lawyer practicing in Turkey with a focus on violence against women and femicide cases. Following her degree in law, she has completed her MSc degree in European Studies at the London School of Economics and Political Science in 2003. She has worked at a local law firm in Istanbul for nearly ten years till 2014 when she established her own practice concentrating on criminal and family law. Bozkurt is the Advocacy Coordinator of We Will Stop Femicides Platform, a feminist non-governmental organization founded to protect women’s “right to life” and to prevent gender-based women homicides in Turkey. As an active member of the Platform, she attends criminal cases and provides legal support to women who are subject to domestic violence and to bereaved families. She has gained her second master’s degree in 2019 at the Human Rights Department of Bilgi University, Law School with her thesis, “Legal Advocacy As A Feminist Activism Strategy” looking at the feminist legal advocacy and review of Turkish feminist NGOs and lawyers that use legal advocacy as a feminist activism instrument. Bozkurt writes articles on violence against women, lectures trainee lawyers at the Istanbul Bar Association and gives interviews and attends local and international conferences to talk about gender-based discrimination against women in Turkey and femicide cases. Bozkurt was one of the speakers at the 7th Women of the World Summit in 2016 in New York at the “Fearless Women of Turkey” session. She has recently been involved in a documentary film, “Dying to Divorce”, directed by a British journalist Chloé Fairweather that portrays the surviving women who were subject to violence by their spouses for applying to divorce.

Liana Varon completed her Bachelor’s and Master’s degrees in International Relations at Koç University in Istanbul, Turkey. She is currently working as the Coordinator of the Support Foundation for Civil Society where she is responsible for program management and developing relations with individual and corporate donors. Prior to joining Support Foundation for Civil Society, she worked as the Deputy Secretary General at the Third Sector Foundation of Turkey (TUSEV) between 2011 and 2018, where she was responsible for the coordination of TUSEV’s program areas and communications. Her areas of interest include civil society development, philanthropy and strategic giving, civil society law and public sector – civil society cooperation. She has contributed to various research initiatives and reports in the areas of civil society development and philanthropy and she continues to pursue a master’s degree in Philanthropic Studies at the Indiana University Lilly Family School of Philanthropy. Varon served as a steering committee member of the CIVICUS Affinity Group for National Associations between 2016 and 2018.