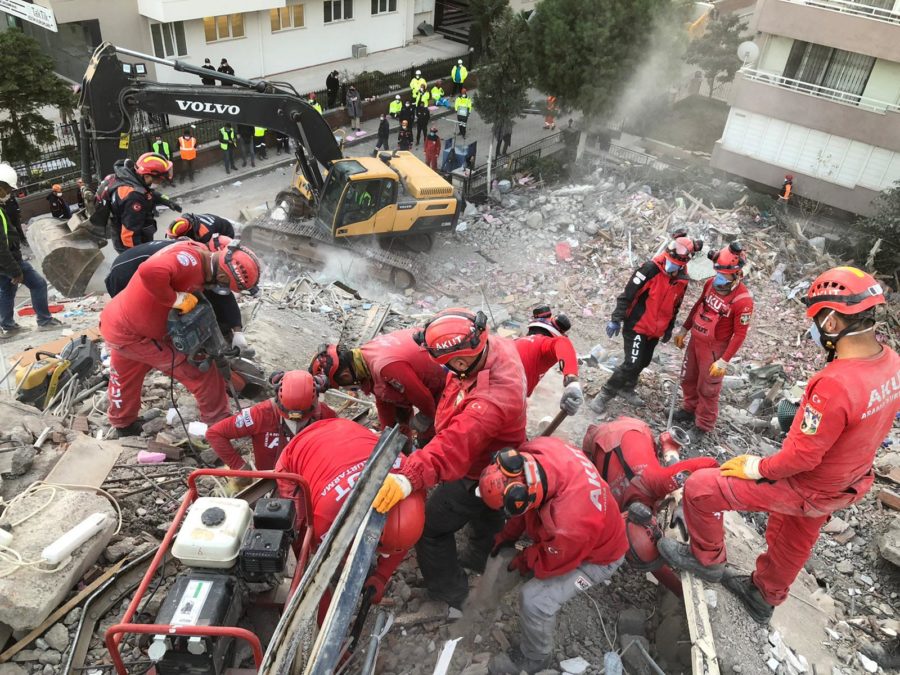 AKUT is one of our Izmir Earthquake Emergency Support Fund grantees. The organisation will purchase equipment that search and rescue teams need in their fieldwork and provide training on how to use the equipment to their volunteers.  Additionally,  AKUT plans to provide food and hygiene packages to 250  families affected by the earthquake in the tent/container areas.

The İzmir Earthquake Emergency Support Fund was created with the financial contributions of the Turkey Mozaik  Foundation and the Kahane Foundation to support civil society organizations (CSOs) and their work on the field responding to the emergency situation after the earthquake in the Aegean Sea on October 30, 2020.

Below is the interview with AKUT:

AKUT is among the first search and rescue organisations in Turkey. Can you tell us about the aims and activities of AKUT?

A group of mountain climbers came together and founded AKUT in 1995 after the 14-day search for 2 university students who disappeared in the Bolkar Mountains and couldn’t be found. This group carried out its first rescue activity in Uludağ under the name of AKUT in the same year. As a result, the association was formed and became a legal entity with the name “AKUT Search and Rescue Association” on 14 March 1996.

AKUT, Turkey’s first search and rescue association, was established with the aim of performing accurate and effective search and rescue activities in the mountains and other difficult natural conditions. AKUT also assists the relevant official institutions in natural disasters if requested.  Due to their work in the 1998 Adana-Ceyhan earthquake, AKUT received a public benefit status on January 19, 1999, with the decision of the Council of Ministers. In the Marmara earthquake, which can be considered as a milestone in search and rescue activities for Turkey, AKUT became the pioneer in this area by changing the perspectives and approaches of many civil society organisations, public institutions, and private sector with its vision and focus in this field and its well-organised work.

AKUT also carries out activities overseas to transform its knowledge and experience into positive social impact and saving human lives. The organisation actively took part in the search and rescue efforts in the Greece-Athens earthquake that followed the Marmara earthquake. After Athens, AKUT carried out search and rescue activities in Taiwan in 1999, India in 2001, Iran in 2003, Pakistan in 2005, Haiti in 2010, Nepal in 2015, and medical support activities in the Mozambique flood in 2000 and 2019. Through these efforts AKUT improved its position in the international arena day by day.

AKUT, which has been a member of the International Search and Rescue Advisory Group (INSARAG) under the umbrella of the United Nations since 1999, has become one of the most experienced and knowledgeable teams in the world on search and rescue activities in earthquakes in accordance with international standards. AKUT became the first organisation in Turkey to receive the “Classified Mid-Level Team” certificate in 2011 according to INSARAG standards of “Heavy Search and Rescue Team” and “Medium Search and Rescue Team”.

Growing and getting stronger every day with its existing 27 teams and new teams that are being formed AKUT continues to work with devotion and determination to create positive change and updates its methodology in line with any new information that may arise.

AKUT carries out its search and rescue activities with the support of volunteers.  How does the volunteering process work in AKUT and what are volunteers’  contributions to your work?

Volunteers apply through the AKUT Portal, via the link on our website. Then they are invited to an initial meeting which includes an introduction to the association and a process of getting to know the candidates. The candidates are then invited to the “basic disaster awareness-raising” and “ethical discipline” orientation seminars. After participating in these seminars, the candidates are requested to fill in five separate forms and sign five documents. Finally, an interview is conducted to get to know them better and decide which department or unit they will be assigned to. The candidate becomes a volunteer after these stages.

The organisational structure of AKUT includes seven departments and units consisting of financial and administrative affairs, project and fundraising, logistics, corporate communications, human resources and training, and operations. AKUT operates in accordance with the procedures of each department and unit, working in coordination and jointly with other departments and units. Volunteers may take part in one or more departments or units according to their own requests and/or expertise. We offer a wide spectrum of work for our volunteers.

AKUT has become more known by the public in 1999after the Marmara Earthquake. Since then what kind of developments have occurred in the field of search and rescue and emergency interventions in Turkey?

The Marmara earthquake was a turning point for Turkey. After this earthquake, alongside many search and rescue associations, many CSOs working on post-disaster psychological support and humanitarian aid became more active.  The role of civil society in this area was emphasised once more. Today, we are in a much better place in terms of the effectiveness of CSOs. We think that the support given by the Disaster and Emergency Management Presidency (Afet ve Acil Durum Yönetimi Başkanlığı-AFAD) to CSOs has also made an important contribution.

AKUT also carries out awareness-raising and training activities on disasters and first aid. Can you tell us about your work in these areas and the benefits of these preventive efforts?

As one of Turkey’s most trusted organisations, AKUT continues to organise awareness-raising activities with a sense of social responsibility.  In this context, the training units of AKUT provide seminars on “Basic Disaster Awareness” and “Earthquake Awareness” reaching a total of 100,000 people with an average of 2,000 sessions per year.

Within the scope of “Life Continues Turkey” project between the years 2010-2014, AKUT truck travelled 60,000 kilometres across the country and provided “Earthquake Awareness” seminars to 5.5 million people in 52 provinces and 174 districts across Turkey.

We are supporting AKUT under our Izmir Earthquake Emergency Support Fund with the financial contributions of the Turkey Mozaik Foundation and Kahane Foundation. Can you tell us about the activities you will implement with this grant and how they will contribute to your work?

AKUT has been giving disaster awareness seminars and conducting public awareness activities for many years. However, it is also important to inform the public about the outbreak that we are currently experiencing. For this reason, while distributing the hygiene packages to the families we will reach within the scope of the project, we will also distribute the brochures to raise awareness of the disasters and the outbreak. In this way, we hope to help earthquake victims, who are worried about the earthquake they experienced, to feel that they will live with an enhanced sense of safety if they are better prepared for disasters. In addition, we will use this grant to purchase new hardware for cutting and separating the debris, since the previous one was damaged during the search and rescue activities in the Izmir earthquake. Thus, we will be better prepared for another post-disaster search and rescue intervention.