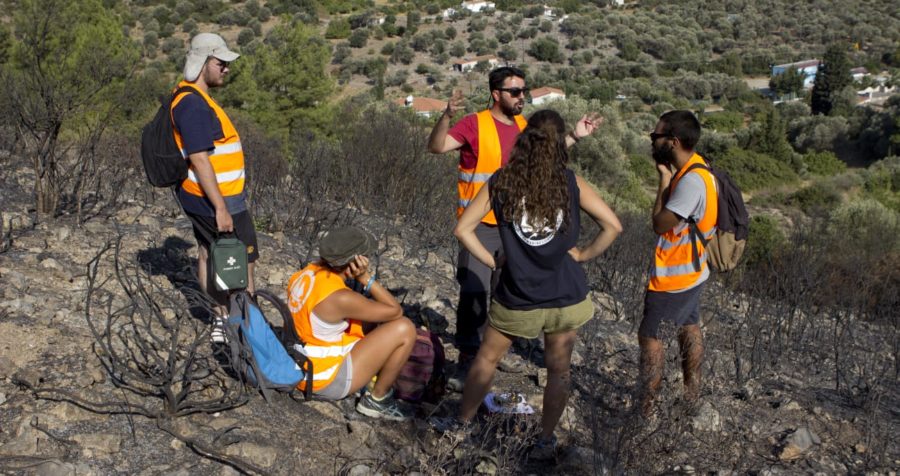 Natura Nature and Culture Conservation Society Association – NATURA (Natura Doğa ve Kültür Koruma Derneği) is receiving a grant from our Turkey Wildfire Relief and Mitigation Fund to scan the areas affected by the wildfires with camera traps to reveal the current situation and habitat use of the wildcat population in the area.

Read below our interview with NATURA:

Can you tell us about the aim and activities of the Natura Nature and Culture Conservation Society Association?

Nature conservation experts in our association have been working to protect Turkey’s nature for about 10 years. However, in recent years, opportunities to implement different strategies have emerged depending on the developments in the field of nature protection both in our country and throughout the world, and there has been a need for new unique corporate identities that can make use of these opportunities. In line with this need, our association was established in Ankara in 2015 to contribute to the guidance of citizens who can advocate in the field of nature protection in our country, support the training of volunteer and professional nature conservationists, and implement new nature protection strategies.

NATURA aims to make nature protection one of the main agendas of the country and believes that the strongest activism is through science. The main objectives of NATURA are to create special conservation areas by establishing private property, manage Wildlife Research, awareness-raising, and natural habitat protection projects, train voluntary conservationists such as university students, and organise regional/national/international events and develop collaborations.

If we sincerely want this red pine ecosystem to regain its natural character, the experts’ opinions on reforestation should be sought.

What are the direct or indirect effects of wildfires on wildlife? Can you elaborate on the factors resulting in these effects?

This was the largest fire in the history of the Turkish Republic. The degree of forest loss is at a level that forces the ability of even red pine forests to regenerate themselves. Most of the burned region was home to scale insects, which produce honeydew so that bees can make pine honey. Burning of these areas is a huge loss for our country, which produces 92% of the world’s pine honey, and at least 30 years are required for recovery.

There are Marmaris salamanders in the region and many may have died. Again, there is a lot of death in tortoises, one of the reptile species that cannot hide under the ground immediately. Birds flew away when the fire had started, but there might be inevitable deaths related to inhalation of smoke. We believe that there is no serious loss in mammals except for some species. Animals such as wild goats, caracals, wild boars, foxes, and marten moved away from the fire. Similarly, we don’t have any losses from the brown bears.

It is easy for escaped mammals to meet their food and shelter needs so that they can resume their lives in the area they reach. After all, the unburned field is more than enough. Yet, some species, such as wildcats, will have serious adaptation issues because the most suitable habitats no longer exist.

If we sincerely want this red pine ecosystem to regain its natural character, the experts’ opinions on reforestation should be sought. If it had been 200 years ago, these burned areas would have fully recovered in terms of flora and fauna within 20 years. Unfortunately, today we cannot be that optimistic. With the loss of every animal, tree and maquis species, the ecosystem struggles due to the human pressure and burden.

You have implemented the Anatolian Sweetgum Protection Action Plan with the Marmaris Municipality Environment Working Group. Can you tell us about the importance of sweetgum forests? What is the purpose of this action plan?

NATURA works on nature protection in Anatolia, yet it mainly focuses on protecting the Anatolian Sweetgum Forest (Liquidambar Orientalis Miller), a tertiary (60 million years) based relict, a globally endangered river forest ecosystem that is endemic to the Eastern Mediterranean Basin.

Continuous and wholehearted management is of great importance in protected areas such as the Anatolian Sweetgum Forest, which have a very sensitive and special forest ecosystem, which is fragmented and on the verge of extinction. However, since pieces of fragmented and occupied sweetgum forest are either owned privately or used as cultivated land under 2B status, the state cannot manage these areas. In this context, NATURA aims to create private forest property and afforestation through the ‘corridor methodology’ for the acquisition of occupied forest areas to reunite the fragmented sweetgum forests.

Similarly, to reclaim fragmented and occupied forest pieces, we aim to implement the “Special Protected Areas Network” method, a relatively new method for the country. On the other hand, we also develop other protection practices for the natural (wildfire, flood, overflow, erosion, earthquake, etc.) and anthropogenic (hydroelectric dam, dam, mines, agricultural occupation, settlement, tourism and industrial pressure, etc.) limiters/pressure affecting the natural ecosystems at the region.

Since its establishment, NATURA, along with the collaboration of almost 30 different organisations and institutions –Marmaris City Council Environment Working Group being the main driver- works as one of the main stakeholders in the management and execution of the Southeastern Anatolian Sweetgum Forest Action Plan in Marmaris, Köyceğiz, Fethiye, Dalaman, and Ortaca regions. The Action Plan was prepared entirely voluntarily between 2017-19 and includes 19 main activities covering the years 2019-24. The execution of the activities is also based on the voluntary cooperation of the institutions.

With this project, we plan to attach satellite transmitters to the wildcats and caracals that remained in the area and reveal the habitat use patterns of wildcats and their relationship with caracals.

You will implement the Last Wildcats of the Mediterranean Habitats project with the grant you received from our foundation. Can you tell us about the aim and activities of the project?

Unfortunately, the old and relatively humid red pine forests, which are wildcat habitats, were completely burned during the wildfires. These habitats were hosting the healthiest wildcat population. We think that some of the wildcats died, and some moved to unburned areas. However, likely, they will not be able to find their prey, especially the squirrel (Sciurus anomalus). In addition, the presence of caracal species in the habitat to the north of the burned areas will create intense competition. In this case, wildcats might be under severe stress, resulting in the extinction of the rarest wildcat species in the Mediterranean basin. So, we are planning the following various research, conservation, and awareness-raising activities within the scope of this project:

You will be using a satellite transmitter to track wildcats for the project. Can you tell us why you have chosen this method?

Tracking with satellite transmitters provides significant data to researchers for analysing the conditions of the animals such as the choice of habitat, the features of their daily and yearly activities, relationship with other species, the migration, dispersal, and settlement patterns of the species that reach adulthood, and the daily translocation speed and energy consumption.

With this project, we plan to attach satellite transmitters to the wildcats and caracals that remained in the area and reveal the habitat use patterns of wildcats and their relationship with caracals. Of course, studies on wild animals do not always go as planned. The field conditions and the degree of loss in the wildcat population can reduce our likelihood of capturing them and attaching transmitters. First, we will follow them with camera traps. We will concentrate on the points where the probability of being caught is highest. Maybe we’ll be able to catch them after the project’s end date. In this case, we aim to provide instant information on the developments. Because the equipment we bought thanks to this project can be used over and over again in similar activities.

Established in Ankara, Natura Nature and Culture Conservation Society carries out its activities on protecting sweetgum forests by way of creating a corridor between the sweetgum forests, assembling the fragmented forests and reversing the destruction process of these forests.