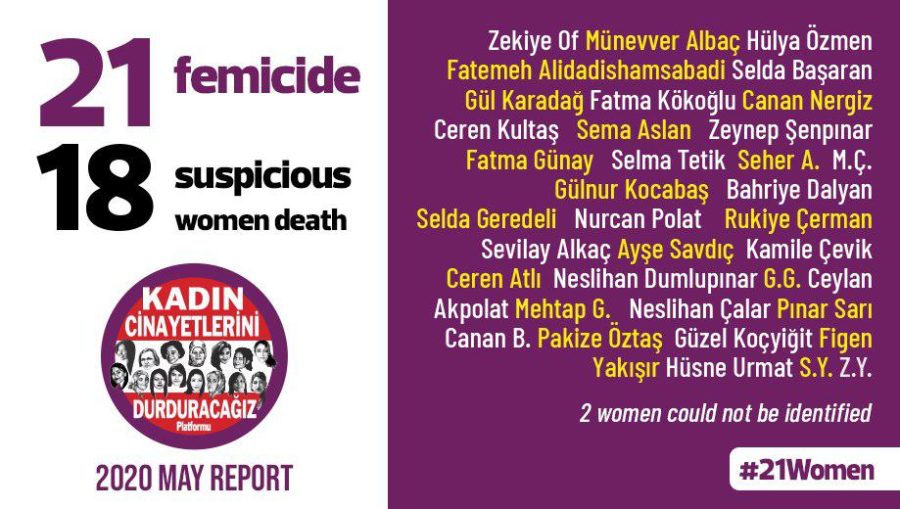 Our grantee “We will Stop Femicides” (“Kadın Cinayetlerini Durduracağız”) Platform is is a women’s NGO, founded in 2012 as a social reaction to the homicide of Münevver Karabulut, a young woman brutally murdered by her boyfriend, who was aided by his family. The Platform’s main aspiration is to fight against gender-based violence and raise awareness in society about the volume of violence against women (VAW) in Turkey.

“We will Stop Femicides” Platform has been working hard to spread and promote the Istanbul Convention, the landmark treaty of the Council of Europe and the first legally-binding international instrument that “creates a comprehensive legal framework and approach to combat violence against women.

The Convention characterises violence against women as a violation of human rights and a form of discrimination. States that ratify the Convention must criminalise offences including: psychological violence, stalking, physical violence, sexual violence, including rape, explicitly covering all engagement in non-consensual acts of a sexual nature with a person, forced marriage, female genital mutilation, forced abortion and forced sterilisation. The Convention states that sexual harassment must be subject to “criminal or other legal sanctions” and also includes an article targeting crimes committed in the name of so-called “honour.” Please see below our interview with the We Will Stop Femicides Platform Association.

The establishment process of We Will Stop Femicide Platform Association began with the murder of Münevver Karabulut which caused a huge public backlash in Turkey. Can you tell us about the aims and work of the Platform?

The platform was established by families of women who were subjected to violence or were killed. As the platform, we have been following hundreds of women’s murders, physical-sexual violence, threats, insults and child abuse cases. We share the report of the femicide statistics and facts, monthly and yearly with the public. Our decisions are made in regular meetings with all women who want to join our cause. We organize protests and trainings to advocate for the implementation of the Istanbul Convention and Law No. 6284. In order to engage women in our struggle, we open stands in public places and distribute brochures. In addition to these, our support hotline can be reached by women in emergency situations and we direct women according to the support they need. This way we also make sure that the mechanisms for protection of women work properly.

You compile the data on femicides in Turkey every month and share it with the public. What value does this bring to the ongoing struggle of women’s movement in Turkey? (See the image above for May 2020)

Collecting and sharing data is important for revealing the reality of femicides. As stated in the Istanbul Convention, it is essential to keep these data to detect the problem and see the impact of measures taken. For example, the 2011 Femicide Report shows that the least number of women were murdered in that year. When we look at what happened in 2011, we see that the Istanbul Convention was signed and the Law No. 6284 came to the public agenda. This information provides an important insight for us to understand how to fight against femicide and it also motivates us to continue to struggle for the implementation of the Istanbul Convention principles and Law No 6284.

The femicide cases are becoming more visible in the public eye. Furthermore, thanks to the advocacy work and campaigns organized by the women’s movement such as your Platform the reactions against femicidies are growing. Despite these developments, we do not see a decrease in these incidents. In your opinion, what kind of mechanisms do we need to prevent femicides?

Preventive policies are not sufficient alone. Women who are in danger and receives ongoing violence threats should be protected. This protection mechanism is possible with the Law No. 6284. If the Law No. 6284 is implemented effectively, violence can be stopped before it starts or its level advances.

If violence has occurred, justice must be provided. This process should be operated without causing more trauma for women. Although at individual level the belief in justice system is weak in Turkey, we see that women who are exposed to violence have started to file more  official complaints throughout years. The jurisdiction has to ensure justice by making fair trials. As stated in the Istanbul Convention, the penalties that normalize violence should not be applied in order to ensure gender equality. Providing justice is important not only for the traumatized women but also it will be a deterrent for the public.

Women should also be empowered socially, economically and politically. For example, 11 million women in Turkey is not even considered in the workforce and unemployment rate is already high. This situation prevents women from defending their rights. However, it is much easier for a woman who is strong socially, economically and politically to resist the danger of violence and defend herself. All of these mechanisms are defined in the Istanbul Convention and in Law No. 6284 considerably. Failures in the implementation of the mechanisms reinforces the violence. If these mechanisms and processes are implemented entirely, we can stop femicides.

What kind of rights does the Law No. 6284 to Protect Family and Prevent Violence against Woman can provide for women? Based on your experience from the field, can you evaluate the current situation regarding the implementation of the Law?

Law No. 6284 provides protection for violent acts or possible dangers not only from the family members, but also from any men that a woman already knows or not. In the law, there are many protection and precautionary articles such as restraining order, providing shelter for women with her children away from the source of violence, change of workplace, change of identity information, confidentiality of address information, face replacement surgery, financial support and temporary custody of children and electronic ankle monitor for perpetrator. All the judicial decisions have to be made under the coordination of ministries and practioners such as social workers and police, but this is not the currently applied in practice.

The restraining orders are usually not implemented, women are not monitored to keep them safe, police force does not take action for preventive detention in case of violence. While the law requires preventive detention without a lawsuit, in practice the lawsuit is required. The rest of the protection and precautionary judicial decisions are very difficult to get. The ministry budgets are said to be insufficient for face replacement surgery requests. It is also stated by the public authorities that supply of the electronic ankle monitor is inadequate. Employment and financial aid are also hardly given in these cases. Either it is rejected or it takes a long time until this decision is made. Understanding the level of danger women are in is necessary to make appropriate preventative decisions, but most of the time, only the restraining order is imposed. Although we observe improvements compared to the past, we still witness cases where women’s complaints are not officially filed by police. When there is a demand for workplace change, the demand is either rejected due to the lack of coordination between institutions or it takes a long time for the decision to come out.

We Will Stop Femicide Platform received a grant support from our Gender Equality Fund that we launched in 2019. Could you tell us about the project “Life Saver of Women: Law No. 6284” that supported by the Fund? What kind of activities will you implement as part of this project?

As can be seen from the answer to the questions above, the implementation of the Istanbul Convention and the Law No. 6284 are vital for women. This is an important step to prevent violence against women at the moment. This is why, the implementation of the Law No. 6284 is the “life saver”. Women must first know their rights and empower other women around them. For this reason, we chose the municipalities as our main target group because we already know that it is one of the most accessible public institutions. In two districts of five provinces, we will provide training to municipal employees and muhtars on the Istanbul Convention and Law No. 6284. We will also organize trainings for women in the cities. These trainings will not only help women learn about their rights within the framework of Law No. 6284, but also, they will be able to inform their peers about these rights and available mechanisms. It will also enable municipalities to act against violence against women as an institution.