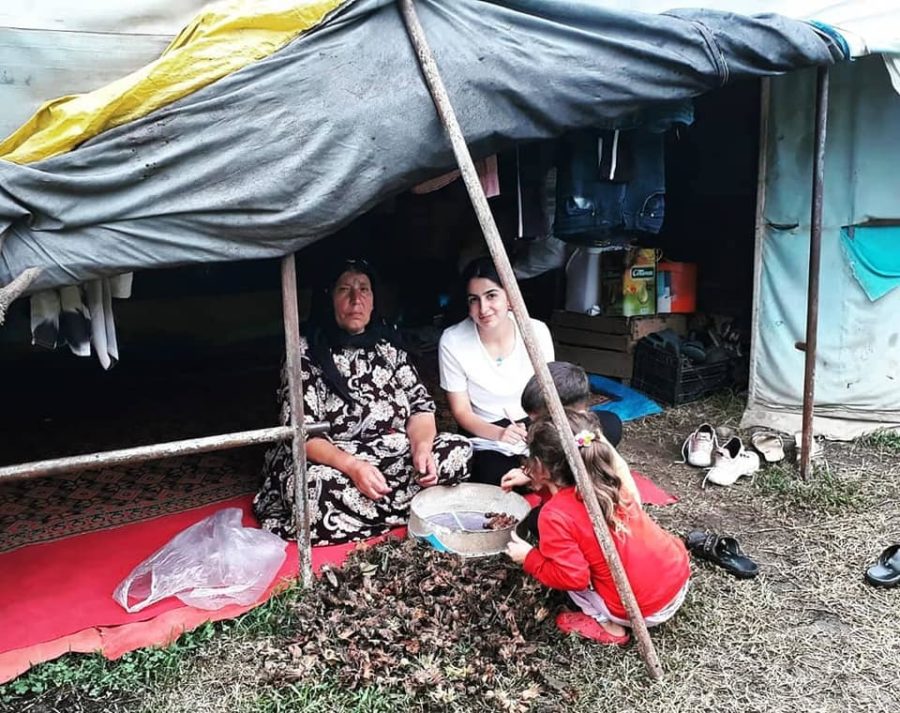 Our grantee, Ordu Association of Empowering Women (Ordu Kadını Güçlendirme Derneği-ORKAGÜDER) was established in 2010 as a rights-based organisation which works with disadvantages groups such young people, disabled people, children and especially women in order to prevent violence and discrimination based on gender in East Black Sea Region of Turkey. The Association conducts studies on child labour in seasonal agriculture, child protection, child neglect and abuse.

Due to hazelnut harvest, Ordu hosts seasonal agricultural migration workers and their families every year. Within the scope of the project for Turkey Mozaik Foundation’s Children’s Fund, Within the scope of the project, ORKAGÜDER aimsto raise awareness about children rights and child labour among local children in Ordu and children who came for seasonal agricultural work. Working with an expert, the Association will develop an educational module for children on the issues of children’s rights, child labour, discrimination and hate speech. Below, please find the interview conducted with ORKAGUDER about their mission and acitvities.

Can you tell us about your mission and activities of the Ordu Women’s Empowerment Association which is a rights-based civil society organization working with vulnerable groups such as young people, disabled people, children and especially women?

Ordu Women’s Empowerment Association was founded in 2010 by a group of women entrepreneurs. Our founder and president is Mehtap Mihriban Yuva. Although our purpose was initially to support women’s entrepreneurship, the Association decided to change its focus to domestic violence cases against women and children as women approached us for help. Our Association has been conducting rights-based activities along with educational and awareness-raising activities focused on gender equality and violence against women since 2011. We conduct studies on child protection, especially on child neglect and abuse, and child labour. While conducting case-based work on violence against women, child neglect and abuse; we also carry out awareness and advocacy-based activities on gender, child protection and child labour. Although our association centre is in Ordu, we continue our activities in several cities in the Black Sea region such as Samsun, Giresun and Trabzon.

We organize workshops that bring different groups together to promote gender equality. For example, in our Equality Starts within Neighbourhoods (Eşitlik Mahallelerden Başlıyor) project, we conducted gender-focused workshops with 92 mukhtars in Ordu. We organised workshops with local media employees operating in Ordu and Giresun provinces to discuss gender-based discrimination within the scope of for our Civil Society and Local Media Cooperation against Discrimination Project (Ayrımcılığa Karşı Sivil Toplum ve Yerel Medya İş birliği). As a result of these workshops, we created the gender policy document for the local media.

Our other area of focus is children. We carry out case-based studies on child abuse. Since 2012, we have been working on the negative effects of seasonal agricultural migration on children. We organised awareness-raising activities with hazelnut producers, which is the main agricultural livelihood in Ordu, on the prevention of child labour. We also organised visits to the accommodation facilities of seasonal agricultural workers. We had meetings with local authorities to improve their living conditions and developed a study that is very important to understand the current situation of seasonal agricultural workers in Ordu. Since the harvest season of 2019, we have been carrying out our project on Determining the Wellbeing of Children Participating in Seasonal Agricultural Migration (Mevsimlik Tarım Göçüne Katılan Çocukların İyi Olma Hallerinin Belirlenmesi). With this project, we aim to reveal the negative effects of seasonal agricultural migration on children. Again, in line with our work with local media, we created a child protection policy for local media. We organised six workshops in Ordu and Giresun in partnership with the Ordu Bar Association and Journalists Federation. As a result of these workshops, we created the Child Protection Policy Document in the Local Media (Yerel Medyada Çocuk Koruma Politika Belgesi). We also plan to create a monitoring mechanism for this issue.

25% of world’s hazelnut production and 35% of Turkey’s hazelnut production takes place in Ordu. Ordu has the highest hazelnut production rate in Turkey and as a result receives intensive seasonal migration. Workers, arriving during the hazelnut harvest period, stay in tents or, mostly, in the areas designated by land owners. These areas are identified within the Project for the Improving of the Working and Living Standards of Seasonal Agricultural Workers (Mevsimlik Gezici Tarım İşçilerinin Çalışma ve Sosyal Hayatlarının İyileştirilme Projesi – METIP). It is estimated that the number of seasonal agricultural workers and their families coming to Ordu is close to 110.000. The rate of children is higher in this number. There are 4 METIP fields across Ordu. Although, around 5.000 seasonal agricultural workers stay in METİP areas according to official figures, the total number in Ordu is well above this figure. There is no official statistics on this issue. However it is commonly known that most of the workers stay in empty areas designated by garden owners such as barracks, old houses, roadsides or under bridges which are not subject to official permission within METIP.

We conducted a field research within the scope of “Determining the Wellbeing of Children Participating in Seasonal Agricultural Migration Project” that we started in the harvest season of 2019. With our ongoing project, we held interviews with seasonal agricultural workers, their families including their children. As a result of these meetings, we reported how seasonal agricultural migration in Ordu affects the well-being of children and provided suggestions for solutions.

You are implementing the Children’s Rights with Games (Oyunlarla Çocuk Hakları) project with the grant we have provided with the financial support of Turkey Mozaik Foundation within the scope of Children’s Fund 2020 period. Could you tell us about the aims of the project and the activities you will implement?

With the Children’s Rights with Games Project, we aim to create a game module for children on children’s rights and to organize rights-based workshops with 400 children aged 9-12 in Ordu. In this context, we will first develop a game module that includes rights of children,  elimination of discrimination against children and child labour in accordance with the universal declaration of children’s rights. We aim to further develop our association’s experience in this area with the grant support we received from Support Foundation for Civil Society and Turkey Mozaik Foundation and turn it into an awareness tool that other civil society organisations can use. In this process, the module will be prepared under the supervision of an expert, Tuğba Kontaş Azaklı, who is a member of the association. After the module is created, we will work on how to apply the module in schools with our two trainers. With the support of our trainers, we will share our Children’s Rights with Games module in schools with children aged 9-12. In this way, we aim to reach 400 children. We are also developing an assessment tool to measure the effectiveness of the module.

In addition, families of seasonal agricultural workers reside in Ordu for two months. These residences are not only in the accommodation areas known as METIP provided by the Governor’s Office, but mostly in the places shown by hazelnut producer families. For this reason, local children and children of seasonal workers spend time together in this process. However, there is a hierarchy among children due to the biased attitude of the producer families. With our project, we also aim to prevent this situation and start a harmonisation process.

It is a known fact that early ages of a child are critical in order to break prejudices and develop a rights-based awareness. Although many studies have been carried out with hazelnut producers in the field, we believe that our project with children who are adults of the future will provide greater benefits in the long term.

We know that the measures taken within the scope of the coronavirus outbreak have led to changes in the work of civil society organisations, as in other areas of life. How did this affect your general activities and the project that you carry out under the grant you received? If there are methods you use to continue your work, can you share them with us?

The coronavirus pandemic has negatively affected our lives and our work, just like everyone else. We are an association that works on the field with different groups. We work by communicating one-on-one with our target groups. So, this quarantine affects us very much. However, one of the most important experiences that comes with working in the field is to frequently face with crises and develop alternative working methods. In this process, we plan to transfer our work to online platforms. Likewise, in our Children’s Rights with Games Project, we created online games module as an alternative to face-to-face games. Nevertheless, I hope we will get through this process all over the world as soon as possible and start working on the field again.