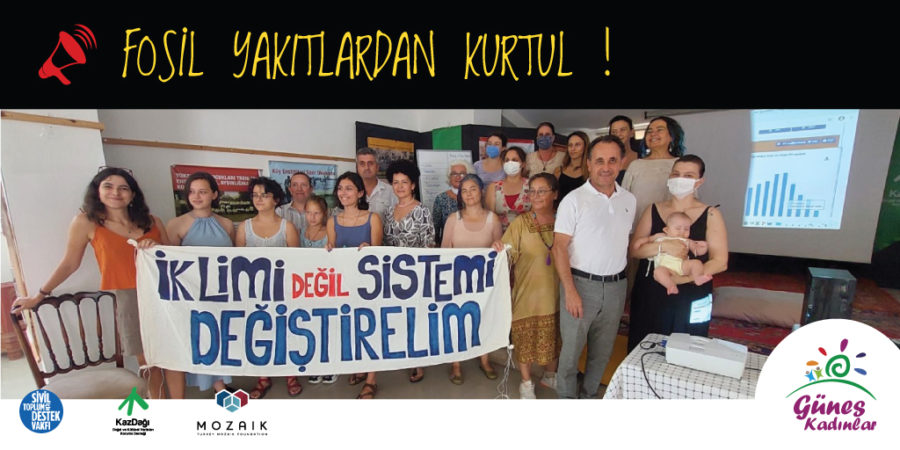 Kazdağı Association for the Preservation of Natural and Cultural Resources (Kazdağı Doğal ve Kültürel Varlıkları Koruma Derneği) received a grant from our Gender Equality Fund in 2020 to support the establishment of renewable energy cooperatives with women in Kazdağları rural areas, and develop a model that challenges gender inequality by creating jobs for women in solar energy production.

Read below our interview:

You recently completed the Women of Sun project with the contribution of our grant. Can you tell us about the purpose and the activities of the project?

The project aimed to establish a renewable energy cooperative initiative for women in the Kazdağları region to disrupt traditional career patterns and provide a role model for women fighting gender inequality. We hoped to help women break free from the social roles they had been accustomed to while also increasing the possibility of renewable energy in the region. We designed capacity-building trainings and organised monthly sessions on teamwork, climate change, renewable energy, gender equality, nonviolent communication, cooperatives, solar energy systems, and experience sharing. Due to the pandemic, we met online for all except one of the sessions.

The project aimed to establish a renewable energy cooperative initiative for women in the Kazdağları region to disrupt traditional career patterns and provide a role model for women fighting gender inequality.

We also wanted to create a mini-documentary to tell the story of the whole process. We intended to keep the association open for the women to strengthen our bonds with them by meeting for various activities. Now we are moving forward as a group in the journey of establishing the cooperative.

We live in an economic system that mainly focuses on growth. Several issues such as the need to take care of the ecosystem, and the destruction of localisation and democratisation under globalisation are ignored by the system. Cooperatives are extremely valuable in pursuing a locally and democratically run economic cycle, which has an entirely different meaning for women. Women, who are economically, socially, and culturally disadvantaged due to gender inequality, are empowered through their contribution to the community’s economy. Towards achieving gender equality, the contributions of cooperatives can be multilayered; socialisation, the development of a healthy community, the ability to work as a team, and the skills that women gain with individualisation. The productions of local women’s cooperatives also contribute to the region’s ecosystem. A cycle is formed with the motto “small is beautiful,” without cutting down forests, building massive facilities, or polluting the air, water, and soil.

Women, who are economically, socially, and culturally disadvantaged due to gender inequality, are empowered through their contribution to the community’s economy.

You approached the issue of climate change from a gender perspective in the project’s workshops. In this context, can you talk about the relationship between gender inequality and climate change?

As a result of climate change, we will see an increase in the frequency and severity of weather disasters such as droughts, floods, forest fires, biodiversity loss, and ocean acidification, among other things. But these disasters will not affect everyone equally because of the existing social, cultural, economic, and political injustices. This is where the notion of climate justice comes into the picture. There is a well-known and self-explanatory phrase used by climate activists: “We are in the same storm, but not in the same boat!”

The concept of gender, which we can describe as the stereotyped social roles ascribed to sexes, has always depicted inequalities for women and LGBTI+s. Because of women’s domestic roles and care work, being deprived of educational opportunities, economic disadvantages, and gender-based violence, for example, women cannot leave their homes in case of a flood, and they cannot migrate as easily as men. Research shows that these incidents harm women living in rural regions disproportionately.

Climate justice makes intertwined injustices visible, and shows that we need to address this issue from multiple perspectives. Our project aimed to play a role in establishing this much-needed justice.

There is a well-known and self-explanatory phrase used by climate activists: “We are in the same storm, but not in the same boat!”

Can you tell us about the difficulties faced by women working in the energy sector today? How should civil society organisations (CSOs) and government institutions address these challenges?

Men dominate the energy sector. The number of women employed in the field is quite low, as is their visibility. It is far more difficult for women to advance in their careers. Thus, there must be a transformation in the energy sector to achieve gender equality. Several studies are conducted, including the formation of networks that bring women together who work in the renewable energy field. Our project aimed to increase women’s visibility and to demonstrate that women can exist in technical fields which are deemed improper for them. CSOs and public institutions must encourage this visibility. Incentives are also critical instruments that mobilise women. We must ensure that women who want to advance in this sector have access to necessary educational opportunities and that their capacities are improved.

Thanks to the Gender Equality Fund, we have achieved our long-standing goal for cooperatives. We had the chance to meet with many women from the Kazdağları region. Every training session we held nurtured not only them but also us. We are making progress towards our dreams that will nourish energy democracy, and the grant support was the first and most essential of these steps: it was the seed of the beginning.

We have a far greater sense of control over the renewable energy industry and cooperative processes, and we are now familiar with the rules of the game. As the Women of Sun, we can now say that we have a place in the cooperatives network. We also anticipate that this experience will assist us in our next steps and will lead us in a positive direction. We would like to thank all our supporters for sharing our dreams and writing this story together.

Kazdağı Association was established by environmental activists to protect natural, historical and cultural resources in the Kazdağı region and its surroundings. Promoting ecological agriculture and clean energy production, prevention of all damages and pollution in the environment due to industrialisation, mining and urbanisation are among the association’s goals.